On Tuesday 29 November 2022, rectors of the largest universities in Lodz signed a declaration to strengthen cooperation within the Lodz Academic Partnership (in Polish: Łódzkie Partnerstwo Akademickie – ŁPA). The signing ceremony was held at the Grazyna and Kiejstut Bacewicz University of Music in Lodz with the participation of city and regional authorities, representatives of the world of science, culture and the arts, as well as companies and business organisations. 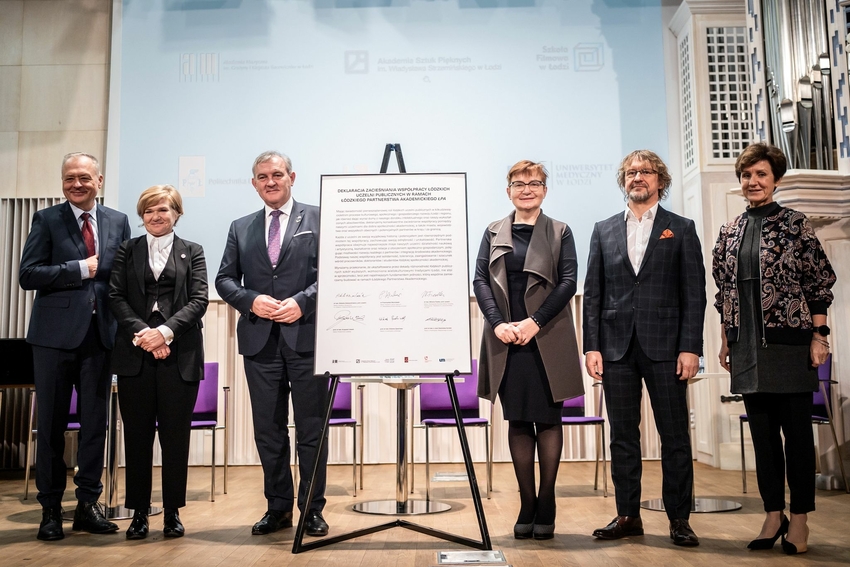 Rectors of the largest universities in Lodz, signatories of the Lodz Academic Partnership declaration, with the text of the document during the ceremony at the University of Music in Lodz. 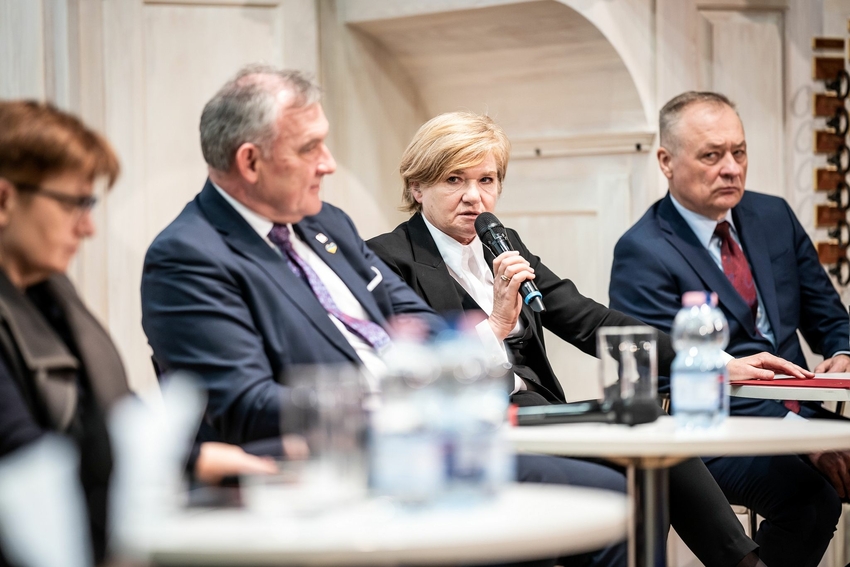 The Rectors' debate was another highlight of the meeting. It was divided into three thematic groups: science and arts, education, community and external relations. Professor Elżbieta Żądzińska, Rector of the University of Lodz, is taking the floor.

Statements by the Rectors

Dr Elżbieta Aleksandrowicz, Professor of the University – Rector of the Grazyna and Kiejstut Bacewicz University of Music in Lodz:

The Lodz Academic Partnership is an important point on the map of integration of the academic community, which is significant for the university as well as the city and the region. The areas of research and collaboration outlined by the Grazyna and Kiejstut Bacewicz University of Music in Lodz in its development plan for the future concern therapeutic aspects, sound realisation and music production, as well as film music composition. The space for collaboration is still open to set new directions for interaction and discovery of the unknown thanks to supporting the art of music with scientific knowledge. It will therefore be important to combine science and arts, exact sciences and humanities in order to educate students and improve the competences of teaching staff in line with the objectives for a leading European university.

Dr Przemysław Wachowski – Rector of the Strzemiński Academy of Fine Arts in Łódź:

There is a lot of talk about the phenomenon of teamwork. At its core, there is the 'spirit of cooperation', which help us achieve truly great goals. Getting involved in one endeavour by a large group of people is not easy, but it is not impossible. The value of teamwork, where everyone is working towards one common goal, cannot be overestimated. The Lodz Academic Partnership is a prime example of this. Thanks to such initiatives the academic community of Lodz has a chance to strengthen the positions of individual universities in Lodz, our joint activities in the area of science, fundraising ... They work to our advantage.

Dr. Milenia Fiedler, Professor of the university – Rector of the Film School in Lodz:

The Lodz Academic Partnership is born out of the need for dialogue and cooperation, something that for Lodz – as an open and multicultural city – has always been natural. No one understands better than we (film and theatre people) do what an important value collaboration is. New stories, values and meanings emerge from the fusion of diverse, even the most extreme energies, talents and potential. By becoming a part of the Lodz Academic Partnership, the Film School in Lodz engages its output and artistic potential. I believe that the cooperation between the six universities in Lodz, which has just been initiated, will bring tangible benefits. I look forward to our meetings, common goals and working towards them.

Today's universities face many challenges and the need for strong integration is particularly evident today, so that our voice is heard in line with the role we play in social and economic development. The Lodz Academic Partnership gives us the opportunity for effective cooperation between the largest universities in our city. We are convinced that this initiative will strengthen scientific cooperation, open up further opportunities for joint research projects, and allow creative discussions in interdisciplinary teams. Universities are constantly striving to raise the level of education. Each new partnership gives us further tools in this area. Students are the backbone of the academic environment and surely closer cooperation between universities in Lodz will be an interesting development prospect for them as well.

The era of 'lonely islands' in science is over. The most groundbreaking research projects are managed by large teams of outstanding scientists. If we want to think seriously about raising the academic potential of Lodz, we need to do the same in the context of cooperation between our universities. This is not something totally new; after all, we have been working together for years, on many occasions. However, in my opinion, a strong, united voice from the academy on many issues is what is needed now – a voice on issues that are not always directly related to research and education, but on issues which are always important, both for the academy's employees, their students and the citizens of Lodz and the region. I believe that the Lodz Academic Partnership is an entry into a new quality of the functioning of Lodz Academia and the beginning – as we say at the University of Lodz, citing Professor Tadeusz Kotarbiński – of a good job.

The Lodz Academic Partnership is a formalisation of the already existing cooperation, both bilateral and multilateral – with the involvement of all public universities in Lodz. I am convinced that the interaction between us, everything we work out together, can have a better effect than our individual achievements combined together. Each university specialises in a different area, and together we can certainly do more. Examples of the already existing joint initiatives include prizes for the best publications awarded together with the Lodz University of Technology or interdisciplinary doctoral studies carried out in cooperation with the Lodz University of Technology and the University of Lodz. And there are also plenty of smaller ventures – competitions or sports events. We will now develop both existing and new projects under the banner of the Lodz Academic Partnership.

The meeting was rounded off by a concert featuring violinist Wojciech Niedziółka, a student of the Grazyna and Kiejstut Bacewicz University of Music in Lodz, the best Pole at the 16th International Henryk Wieniawski Violin Competition in Poznań.  In Henryk Wieniawski's 'Fantaisie brillante' Op. 20, the young artist was accompanied at the piano by Professor Adam Manijak.

Being aware of the leading role of public universities in the decade-long process of cultural, social and economic development of Lodz and the region, as well as being proud of our intellectual heritage and the number of educated graduates, we declare to consistently strengthen cooperation between our universities for the benefit of the academic community as well as the city, the voivodeship and all present and potential partners at home and abroad.

Each university, with its unique history and potential, is an equal actor in this collaboration, maintaining its distinctiveness and uniqueness. The partnership encompasses the core missions of our universities: scientific and artistic activities, education and relations with the socio-economic environment, thus, enhancing the development opportunities of each partner and the integration of the academic community. Solidarity, tolerance, commitment and respect among the staff, doctoral students and students of the Lodz academic community constitute the basis of our cooperation.

We are convinced that the diversity of Lodz public higher education institutions, which has been shaped over decades and reinforced by the multicultural traditions of Lodz, does not contradict the unity we intend to build as part of the Lodz Academic Partnership but is its strongest foundation.