University of Lodz celebrated its 76th anniversary during a ceremonial meeting of the Senate in the Alfred Biedermann's Palace. Due to the pandemic restrictions majority of the participants could follow the event via the Internet connection. The conferment of the title of doctor honoris causa to Mr. Herman Van Rompuy - former President of the European Council (over the years 20092014) and former Prime Minister of Belgium (over the years 2008-2009) constituted the highlight of the celebrations.

Photos from the ceremony

"Taking this opportunity I would like to thank the academic community of the University of Lodz for the fact that together we have managed to overcome this most difficult, I hope, moment and keep the entire Academy in a very good condition. I know that it required a lot of effort from You, but I can assure you that we can be proud of how we were able to help each other, support each other in difficult times and quickly reorganize our lives so as to be able to still function efficiently."

Broadcast of the ceremonial meeting of the Senate:

During his lecture doctor honoris causa of UL – Herman Van Rompuy – referred to the University of Lodz:

" It is a great privilege for me to become an honorary doctor of this great university here today (…) The motto of this university is: 'veritas et libertas', truth and freedom. The journey of seeking is never over. The quest can only take place in a spirit of freedom. Thoughts are free. Our universities played and are playing a major role in this. This university is relatively young, but it is part of a great European tradition of centres of thought and research." 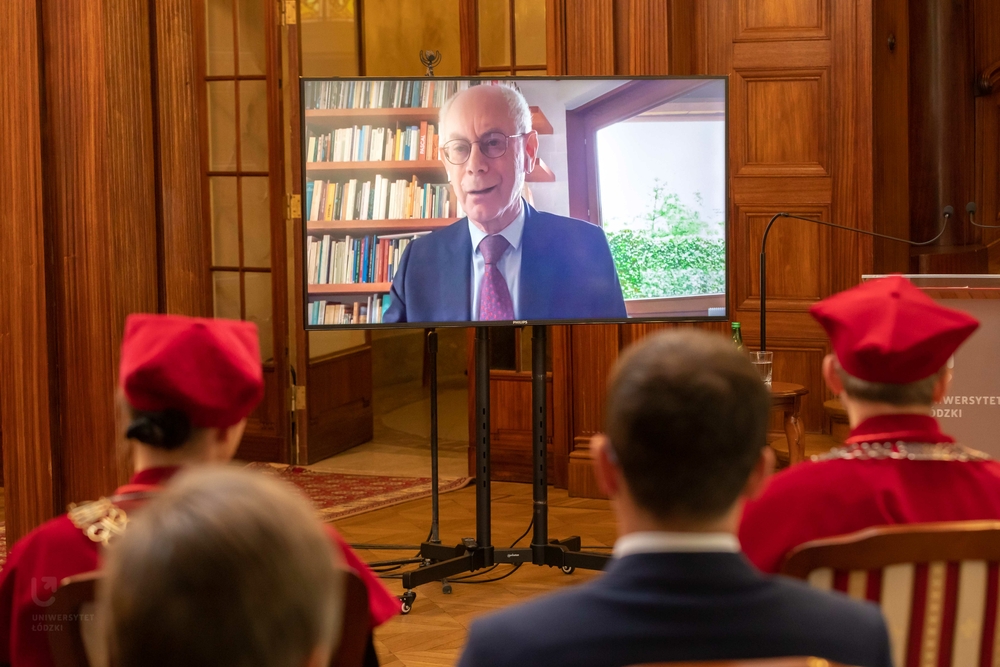 The honorary supervisor was prof. Rafał Matera, Dean of the Faculty of Economics and Sociology of the University of Lodz, who in the laudation listed the reasons for awarding the title to the former Belgian politician:

"The fundamental reasons for awarding Mr. Herman Van Rompuy with the honoris causa degree are to recognise his contribution to the development of European integration and to appreciate the exceptional role he played in the political and social life of European countries in difficult times of economic crisis. This practical dimension is related to the unique role of the politician and intellectual in the life of European societies and economies, including Poland. This approach fits perfectly into the research area of the social sciences and humanities. We award this doctorate to an advocate of sustainable development in a united Europe. And sustainable development is possible when politics is predictable, the economy stable and societies aware of their rights." 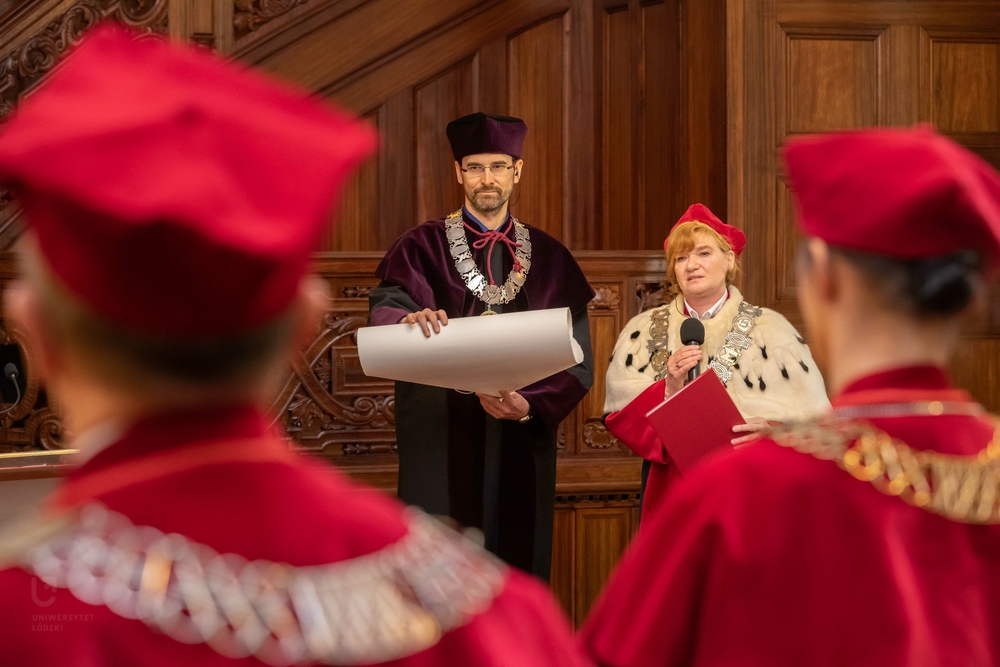 The reviewers underlined, among others, connections of Mr. Herman Van Rompuy with Poland – his numerous visits to give lectures and familiarity with Polish political and cultural reality. The Belgian politician for years has been a fan of Polish Nobel prize winner Olga Tokarczuk. Since 2018 he has been the President of the College of Europe in Bruges, Belgium and Natolin, near Warsaw.

During his lecture on the main pillars of the European Union and values for this community DHC of UL – Herman Van Rompuy, said:

"What we defend inwardly, within the EU, we also defend outwardly and vice versa. So in foreign policy too, we cannot remain silent about human rights and human dignity. Other global actors must get used to this. This does not mean that we only cooperate economically and ecologically with like-minded countries. We must be clear about our principles and, at the same time, always be prepared to engage in dialogue with others for the sake of our interests and of the general good of mankind (…)

Selected facts from the life of the doctor honoris causa of UL (from the laudation delivered by prof. Rafał Matera)

Herman Van Rompuy was born in 1947 in Etterbeek, Belgium, in the Brussels-Capital Region. In 1965, he graduated from the College of Saint John Berchmans in Brussels. Three years later he obtained a Bachelor's degree in philosophy at the oldest Belgian university, the Catholic University of Leuven. In 1971 he obtained a Master's degree in economics at the same university. Right after graduation, he worked in the administration of the National Bank of Belgium, while also being actively involved in the Belgian Christian People's Party.

From 1978 he remained in the party's highest leadership and held responsible political positions: he cooperated with Finance Ministers, he held the position of Secretary of State for Finance and Small and Medium Enterprises. He was Deputy Prime Minister and Minister of the Budget.

From the mid-1990s Herman Van Rompuy was a member of the Belgian House of Representatives. He was also elected to parliament in 1999, 2003 and 2007. Becoming Prime Minister of Belgium in 2008 was the crowning of domestic political activity of our doctor honoris causa.

In 2009 a new phase in Herman Van Rompuy's life began (…) In November 2009, he was elected the first full-time President of the European Council, taking office on 1 December 2009 and serving two terms until November 2014.

Throughout the period of his political activity, Herman Van Rompuy was also active in academic and cultural life. He was director of the Centre for Political, Economic and Social Studies, and worked as a professor at the Handelshogeschool in Antwerp. After his presidency he was a professor at the University of Leuven and the College of Europe in Bruges.

Edit: Promotion Centre, UL (based on the materials of the honorary supervisor – prof. Rafał Matera and those of Mr. H. Van Rompuy)