Colloquia Ceranea - meeting of researchers from around the world

Colloquia Ceranea - meeting of
researchers from around the world

In spring, at the University of Lodz the third edition of the international, interdisciplinary scientific conference Colloquia Ceranea, organized by Centrum Ceraneum took place. Due to the epidemiological situation, the conference (for the second time) was organised in the remote form (online). The wide interest that the symposium aroused among the academic community allows to assume that it will permanently enter the calendar of events taking place at our University.

The main idea of Colloquia Ceranea is to create a platform on which scientists studying the history of the eastern Mediterranean from antiquity to the modern era will be able to present their research results. A special place here is taken by the studies in the field of spiritual culture of the inhabitants of Southeast Europe and the history of food and medicine in the ancient and Byzantine times, i.e., issues present in the research conducted at the Ceraneum Centre.

Representatives of these specialisations were the ones who constituted the most numerous group of speakers at this year's session. As a result, during the first two days, the participants debated issues related to medieval heresies (as part of the panels Bogomil religious culture; written, oral and landscape; Infidels, heresies and heresiology in the Byzantine World) and topics related to the history of culinary arts and medicine (panels: Diaetetics as medicine for body and soul: dietary qualities in Byzantine medicine ; Food and medicine in Byzantium). The third day, on the other hand, was entirely devoted to issues from the history of literature, political history and art history. 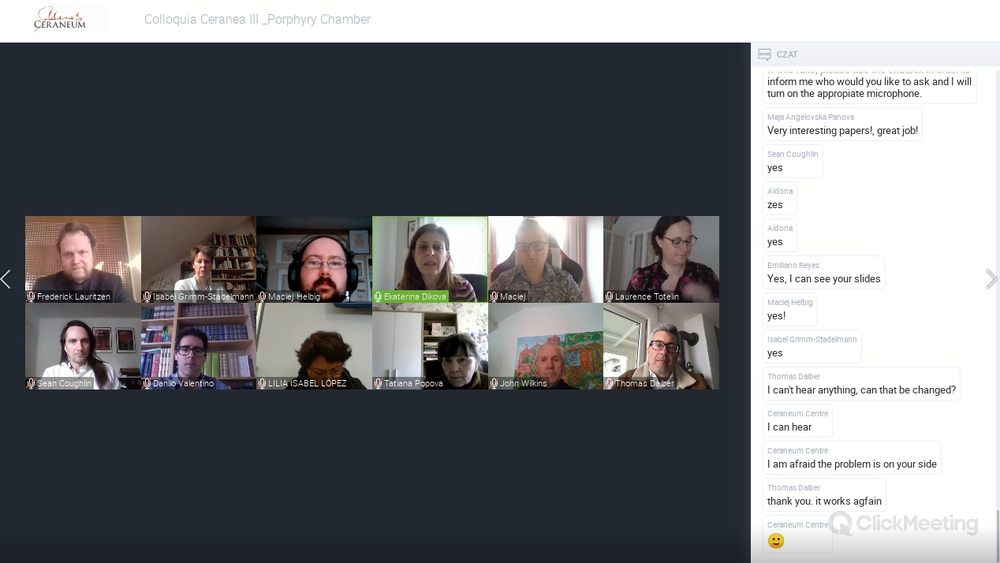 Two plenary lectures were delivered as part of the conference:

There were 5 panels with 18 participants in the part on heresy. The opening panel for this part was organised by dr Andrew P. Roach from the University of Glasgow. Scholars who participated in it focused on the issue of the birth of a new heretical movement, which was Bogomilism in 10th-century Bulgaria. The next panel concerned the relationship between Bogomilism and Western European Catharism, one of the most controversial issues in the history of both movements. Considerations on the state of research in this area have been enriched with detailed considerations on selected aspects of the problem. The remaining three panels in this part of the conference presented various issues related to heresiology and heresies in the broadly understood Byzantine World. There were, among others, issues of the Orthodox attitude towards pagan Slavs, Islam and Hinduism. Colloquia turned out to be a great opportunity to exchange experiences between scholars working on related topics, learn about other research approaches and establish new contacts.

This year's deliberations on the history of food and medicine were attended not only by scientists from Polish and European research units, but also from the South American universities. In total, 24 lectures were delivered. Due to the high attendance and the fact that the vast majority of the speakers represented foreign universities, we could see how dynamically research on both fields is developing in the world’s science. At the same time, the wide interest that our initiative has aroused in the European academic community proves that the University of Lodz is gradually strengthening its position in the international arena in the field of research on the history of food and medicine. The best proof of this is the fact that Colloquia Ceranea was favoured by prof. John Wilkins, an outstanding expert on the achievements of Galen of Pergamon in the field of ancient ars medica, who has participated in our symposium for the second time.

As intended by the organizers, the event was attended by both people on the threshold of their scientific career and researchers who, despite their young age, can boast about significant contribution to the development of research on the history of medicine (inseparable from the history of food), the latter group includes, among others:

Thanks to the remote formula, the conference was also attended by guests from Latin America: Dr Daniel Asade (The University of Buenos Aires), Paola Druille (The National University of La Pampa in Argentina) and Dr Lilia Isabel López Ferman (The National School of Anthropology and History in Mexico). The speech by the last researcher, who showed continuation of the ancient medical tradition in modern times, using the example of the application of milk in Spanish therapeutics was particularly interesting. She also proved that in the era of great geographical discoveries, the Greek ars medica, in the study by Spanish scientists, was transferred to the American continent. Both this speech and most of the other lectures have been published in audio version on the website of the Ceraneum Centre in the Colloquia Ceranea III tab.

The event programme and the book of abstracts can also be found there. The submitted papers will be published in the form of scientific articles in this year's volume of the Ceranea Study.

The organisers hope that in the future they will be able to use the experience gained in organising a hybrid conference model, so that when the pandemic is over in subsequent editions of Colloquia Ceranea, the results of their research can be presented by scientists who, for various reasons, will not be able to come to Lodz in person.