RECTOR OF THE UNIVERSITY OF LODZ 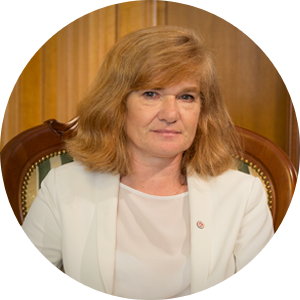 Prof. Elżbieta Żądzińska has been associated with the University of Lodz for 25 years. During this period, she went through all the stages of academic career – from research-technical staff member to the Full Professor.

Over the years 2005-2008 prof. Elżbieta Żądzińska held the position of the Vice-Dean of the Faculty of Biology and Environmental Protection. From 2008 to 2016 she was the Dean of the Faculty and during the term of 2016-2020 she was the UL Vice-Rector for Research. Since 2020 she has been the Rector of the University of Lodz.

Prof. dr hab. Elżbieta Żądzińska is the Deputy Chairman of the Committee on Organismal Biology of the Polish Academy of Sciences (PAN) for the term 2020-2023, a member of the Commission on Anthropology of the Polish Academy of Arts and Sciences and the President of the Science Committee President of The Conference of Rectors of Academic Schools in Poland (CRASP). Since 2014 prof. Żądzińska has been the Honorary Visiting Research Fellow at School of Medical Sciences University of Adelaide in Australia. In 2008 she was a laureate of NOVUM programme implemented by the Foundation for Polish Science.

The Rector's scope of activity includes:

The Rector manages the University with the help of Vice-Rectors, the Chancellor and his deputies and plenipotentiaries appointed to perform specific tasks.

VICE-RECTOR FOR RESEARCH, THE 1ST DEPUTY OF THE RECTOR 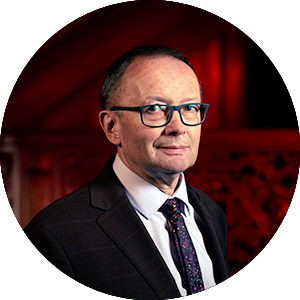 Prof. dr hab. Zbigniew Kmieciak was born in 1956 in Lodz. He graduated from the Faculty of Law and Administration of the University of Lodz, where he was employed after he graduated in 1980. He obtained a doctor‘s degree in legal sciences in 1986. He became a doctor habilitatus (doktor habilitowany) of legal sciences in the field of law - law and administrative procedure by resolution of the Council of the Faculty of Law and Administration of UL in 1994, and in 1999 President of the Republic of Poland awarded Zbigniew Kmieciak the title of Professor. He is a retired judge of the Supreme Administrative Court (he served there as a judge over the years 1996-2018). He is an author of about 300 scientific publications.

Subjects of prof. dr hab. Zbigniew Kmieciak’s interests include, among others, issues of comparative legal studies and Europeanisation of law, issues of the theory of codification of administrative and court-administrative proceedings, guarantee of protection of an individual’s rights, effectiveness of administration activities, standards of "fair" (just) procedure and institutions of procedural law enabling implementation of the concept of good governance, participation in the proceedings of various entities and the "right to a fair trial ". He participated in the work of many research groups and committees designing legal solutions, including - as a chairman - of the team of experts for elaboration of a draft of modernization of the law on administrative proceedings, established in 2012 by the decision of the President of the Supreme Administrative Court.  A major amendment to the Code of Administrative Procedure published in 2017 was a consequence of these works. Member of the Legal Sciences Committee of the Polish Academy of Sciences - two terms, including the current one. As part of the team of this committee, Professor Zbigniew Kmieciak is responsible for the evaluation of the scientific promotion system. Member of several editorial boards and editorial committees of legal journals, including the most prestigious scientific legal journal - „Państwa i Prawa” [States and Laws].

The Vice-Rector for Research performs a function of the first deputy of the Rector.

His scope of activity includes:

During an update process. Please make an appointment by phone in advance.

VICE-RECTOR FOR STUDENT AFFAIRS AND QUALITY OF EDUCATION 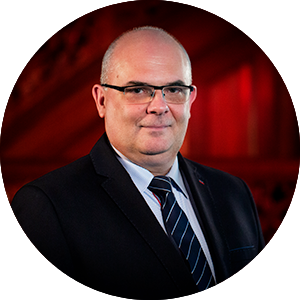 Dr hab. prof. of UL Robert Zakrzewski conducts his main scientific research in the field of chemical science, in the discipline of chemistry and he is focused on the development of new analytical methods used for determination of biologically active compounds. His second mainstream research interest is studying complex skills of students in teaching chemistry. Since 1995 he has been a member of the Polish Chemical Society, and since 2015 a chairman of the Chemistry Didactics Section of the Polish Chemical Society. A member of the Board of the Polish Society for Educational Diagnostics in the 2019-2022 term. A member of the Ministry of National Education expert teams for teaching chemistry, and over the years 2015-2019 a member of the Scientific Council of the Central Examination Commission.

Scope of activity of the Vice-Rector for Student Affairs and Quality of Education includes: 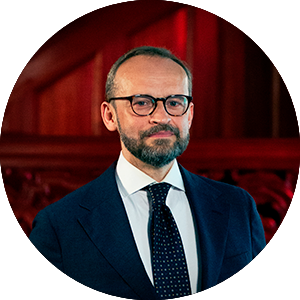 Professor Łukasz Bogucki was born in 1969 in Lodz. In 1993, he graduated from English Philology at the University of Lodz. Four years later he obtained a doctor’s degree in humanities and in 2005 doctor habilitatus (doktor habilitowany) degree. In 2014 President of the Republic of Poland awarded him the academic title of professor of humanities. As a student of PhD studies, Łukasz Bogucki studied in Utrecht, Strasbourg, Barcelona and Leuven, and as an assistant professor and a professor he did internships and gave guest lectures at the majority of Polish universities and leading universities in the United Kingdom, the Netherlands, France, Germany, Italy, Spain, Belgium, Finland, Ireland, Turkey, Portugal, Sweden, Lithuania and Switzerland.

Professor Bogucki is a founder of Intermedia Polish research group; he is also a co-editor of the Peter Lang series Łódź Studies in Language. Over the years, he collaborated on the creation of a periodical - the Journal of Specialized Translation. Over the years 2012 - 2020 he was the Head of the Institute of English Studies at the University of Lodz. Almost from the beginning of his academic career, he has been managing translation specialization at English philology, and he has also been popularising translation studies in Poland and around the world. Audio-visual and computer-assisted translation, as well as the theory and methodology of translation and interpreting constitute primary scientific interests of Professor Bogucki.

Scope of activity of the Vice-Rector for International Relations includes: 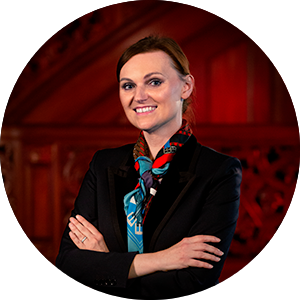 Dr hab. prof. UL Agnieszka Kurczewska specializes in the field of entrepreneurship and entrepreneurship education. She works as an Associate Professor at the Department of Economic Mechanisms at the University of Lodz. She is a graduate of the Faculty of Economics and Sociology of the University of Lodz. She received her master's degree in Economics in 2003, and a year later she started her doctoral studies at the same faculty. In 2008 she obtained a doctor's degree in economics, and in 2015, a doctor habilitatus (doktor habilitowany) degree. Over the years 2016-2020 she was a vice-dean for development, and then a vice-dean for research and external relations. During her dean's term of office, she created, among others, the programme of Faculty's external relations and initiated a regional competition for students Eksoc StartUP!.

Her international academic experiences include work as an assistant professor (Polish: adiunkt) at Aalto University in Helsinki (2010/2011), as well as a 10-month research stay at Tampa University (Mobility Plus programme) and a 3-month research stay at Lund University (Bekker programme). She was also a scholarship holder of the Ministry of Science and Higher Education for outstanding young scientists (2011-2014) and a member of the Council of Young Scientists (2013-2015). Since 2015, he has been a board member of the European Council for Small Business and Entrepreneurship (ECSB). Over the years 2017-2020, she was a thematic editor in the Journal of Small Business Management (JSBM). Her previous professional experience also includes internships at the European Commission in Brussels and at the Council of Europe in Strasbourg.

Scope of activity of the Vice-Rector for External Relations includes: